In this world, particularly western societies, we have embraced a culture that defines and exalts ‘happiness’ and all its ‘expressions’.  Every media venue bombards viewers and listeners with idealistic scenarios of fulfillment, contentment and success – and all without God.  ‘Happiness’ is a highly marketable commodity in a dark and sinful world, proffered through acquiring possessions, using legal and illegal drugs, planning fun filled vacations and experiencing alternative life styles.

Why all these sensory distractions? Why the bombardment of pleasures and happiness, at any cost?  The devil will always present sensory pleasures as relief to man’s needs and pain, yet with underlying evil motives.  Firstly, the quest for pleasure and avoidance of all grief  blinds us to our sin, our mortality, and our separation from God.  Secondly,

Satan knows that that the Creator of the World is a ‘Man of sorrows’ and man’s anguish and grief may lead him to this Savior.  In emptiness and pain, man may find Christ, and in Him new life, fellowship and a door to the power and victory He holds.

What power?  What victory?

Heaviness, despair, and grief visit every believer, every follower of Jesus. We have a formidable enemy, a roaring lion, who seeks to rip us to shreds.  Many days seem that the devil has done this and more, trampling upon a heart already broken.  Only a true cry is needed however for wounded, even dying, sheep.  The Shepherd will come, He will bring healing salve and even more.  He will prepare us through the suffering to serve Him and His Body.

Right relationship with the Lord will deliver and heal and from this healing comes power, as He leads us with eternal purpose.   It is the way of our ‘Commander in Chief’, Jesus Christ, whose path of suffering, betrayal, sorrow and great burden brought the Kingdom of God into our hearts with great promise.   In His shadow, our sorrows are formidable points of power for us individually and collectively as the Body of Christ. The promises of God become fresh and alive.  A salve to open wounds, He is “close to the brokenhearted and saves those who are crushed in spirit.”  Nearly every Psalm expounds the faithfulness of God to get us through darkness and with divine purpose,

“I will take refuge in Your wings until the disaster has passed.  I cry out to God Most High, to God, who fulfills His purpose for me.”  (Ps 57:2)

The power in the blood of Christ flows through suffering.  Surrendered to Him, sorrow separates us from this pleasure driven world and aligns us with the purposes of God through the Holy Spirit.  The broken vessel, surrendered to the Lord, gets the infilling.  The infilling of God comes with both purpose and burden – and a call upon our hearts to respond.

Surrendered suffering opens our hearts to the burden of Christ for His Body and this lost world.

Sorrow tenderizes and enlarges our hearts for action, to “mourn with those who mourn”, and act for those who are suffering “as if you yourselves were suffering.”  It is a burden laid upon our heart and spirit by the Lord, leading us to fight, serve, and minister.  He may call us to ‘go’, to reach out in various ways, and give with sacrifice.  The Lord’s burden for His suffering Body may lead us to fast, call us into all night prayer, and join in with like prepared vessels.

THERE IS SUFFERING ON THE WHEEL BUT GREAT REWARD IN THE POTTER’S HAND.

The burden of the Lord is an honored gift. The sharing of His heart is separate and unmatchable to anything in this world.  The burden of God launches His Holy Spirit through the lives of surrendered men and women.

Sorrow opens a door of fellowship, communion, with the Lord and with His Body.  It is a training ground from which we can, like Aaron and Hur for Moses, “hold up the hands” of our brethren in the battle.  There is no power in self appointment.  Only that which is commissioned by the Lord will have His promised presence and victory.

The Body of Christ is suffering greatly.  There are cries of anguish heard only by God.  We must avail ourselves as vessels to God, ready to be His ears, His hands, His salve, and the means of His provisions as He leads.  If you have been, or are currently enrolled, in the Holy Spirit School of Suffering you are being trained for compassion, being broken for greater strength to serve.  No calling here is insignificant and no calling is too high to reach.  We will be enabled and prepared through He who leads.

To receive the Lord’s burden and co-labor with Him in this world will magnify our joy at His return.    We will share the victory of His coming Kingdom and reign with Him for eternity.

There can be no doubt or dispute that the demise of our brethren under the sword of persecution is brutal and grievous.    Only the Holy Spirit’s power can enable one to endure, with courage, such unimaginable demise.  While some may have lived as nominal Christians, the edge of the sword radically defines their faith and eternal destiny.  Jihadists publicize these devilish deeds to evoke fear and dread, yet testimonies reveal that a living faith is coming forth through the fire.

We however in the west, ‘west of Jerusalem’ that is, are thus far not facing execution but nonetheless have defining moments to declare Christ and be His testimony to the world.   One might imagine that, within this window of relative freedom, Christians might rise up and stand against the consuming tidal wave that looms over our lands.

The tidal wave is not sin, we are already living in that endless flow.  The coming tsunami is the looming judgment of God.  Compromise and complacency expose our unbelief in this prophetic truth, a gross negligence since our call is to proclaim Christ’s return as “Righteous Judge”.

How have we, as the church, become so irrelevant and powerless?  The professed Body of Christ no longer stands apart from the world with open arms to the broken and confused.  No longer pillars of truth, upholding God’s unchangeable standards, we want to ‘belong to’, ‘fit in’, and ‘prosper’ – we certainly don’t want to ‘die’.

To fit anywhere within the world’s lofty standards requires disavowing the righteousness of God – the very standard by which we will be judged.

Few voices are left to even speak of God’s righteousness, when nearly every page of Holy Scripture declares God as righteous – upholding, defending and proclaiming righteousness.   “The Lord loves righteousness…” and “…will judge the world with righteousness” are inescapable truths throughout scripture.

As the professed Body of Christ increasingly merges into worldly standards, we are detaching from our “Commanding Officer”, Jesus the “Righteous One”.  To our own spiritual demise, we are cutting off our own Head, the only true source of power, discernment, and promise.   Accolades and popularity, even prosperity replaces intimacy with the Lord.  Do we realize our own ideas and efforts are worthless?   “Apart from Me you can do nothing” declared the Lord, nothing of eternal value.

The defining line between the world’s lofty standards and the Body of Christ is the righteousness of God.  It is the measure by which the Holy Spirit convicts man of sin and upholds the Cross for forgiveness and eternal life.  Yet, it is a central stumbling block for the professed believer in this world – a truth against which many will align with the world.   The spirit of this world holds great contention against the righteousness of God – changing God’s standards, redefining sin and the ‘wages of sin’.  Ultimately diminished is the expression of God’s great love, the high price He paid to redeem us from sin and cover us with this righteousness.

What is the ‘Great Apostasy’ if not the cutting off of Christ, our Head?  Are we not now in this great apostasy, “refusing to love the truth and so be saved”?  Have we not willingly received a ‘powerful delusion’, the same lie birthed through Satan in the beginning:  you can sin and get away with it – in fact, it is not sin at all!

Coming out from under Christ’s authority and preeminence has great and lamentable consequences.  Apart from Him, His protection and promises to deliver and defend sadly fade, as will His presence in our midst, through the storms and wilderness, and His living word spoken like salve to our heart.   Yet, as we near the precipice of perilous times, He continues to call His sheep back to follow.

Self sufficiency brought fleshly confidence to the western church, dethroning the authority and preeminence of Christ.  Contorting, even dismissing, the Word of God to redefine sin makes the Lord more palatable and acceptable to the world… ‘palatable to the world’ but nauseating to the Lord.  Like the Laodicean church, we are increasingly becoming a headless church, standing in the danger of misrepresenting God.

In His mercy, the Lord will awaken His church, revive His Body, with divine calling, powerful shaking, painful discipline – even orchestrated crisis.  He will have a testimony on this earth through true believers.  Our desperate cry for His presence and promises will define our faith and strengthen allegiance to His Word and His authority over our lives. 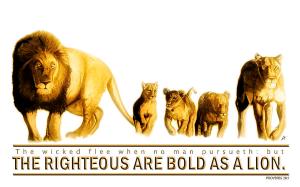 The Lord Himself will empower us to stand and represent Him.  Endowed with His wisdom and discernment, we will have a word for this generation and add to His Kingdom.  Walking in His shadow, our short lives in this world will count for eternity.

“Shouts of joy and victory resound in the tents of the righteous;