God crushes our enemies but we are called to love them.  How can this be?

Loving our enemies is a deep spiritual exercise in our steadfast belief in God’s sovereignty.   When God Unleashes the Giants describes the omnipotence of God as He configures the tribulations, suffering, and even the enemies that will oppress and test us.  When we walk in the shadow of our Master, there are no arbitrary storms neither are there unforeseen enemies.  The Lord orders our steps and measures each trial, limiting the power of any foe over our lives.  Our enemies, even those that would cause martyrdom, are at the Lord’s disposal.   Luke chapter 6 and Matthew 5 expound the familiar yet difficult call of Christ to “love your enemies”.  Yet, within the whole counsel of God there are two separate intertwining powerful truths:

We are commanded to love our enemies and God promises to avenge them:

“ Do not avenge yourselves, dear friends, but give place to God’s wrath, for it is written,   “Vengeance is mine, I will repay,” says the Lord.  Rather, if your enemy is hungry, feed him; if he is thirsty, give him a drink; for in doing this you will be heaping burning coals on his head.”  (Romans 12:19,20)

Firstly, we must resolve never to take what belongs to God, repenting from even vengeful thoughts and plans of revenge. Such are hatched from the flesh and demonically inspired.  Entertaining retribution is a normal and natural great temptation that will separate us from the purposes of God in that very situation.

Secondly, the mandate to love our enemies is impossible to fulfill – necessarily drawing us to the bosom of our Lord.  This is not a fleshly exercise of fluffy love, it is representing the mercy of God to those who have offended us and Him.  God’s love is never arbitrary or random, it is full of wisdom and light.  His guidance must overshadow all our overtures toward the offender so His purposes, not Satan’s, will come to fruition, “…heaping burning coals upon his head.”

Within the fiery trial, in the heat of the battle, our confidence must totally lie in the faithfulness of God’s revealed power and character.  We often think, because it so appears, that the Lord has softened His stand on betrayal and backstabbing, seemingly excusing deep wounds – even martyrdom.  No.

He is rolling up His sleeves.  The burning coals are His merciful warning call.

Our greatest challenge – getting the fire started

Heads aflame.  What are these burning coals?

When we show love to our enemies, we are standing between them and God’s vengeance as His call to shame, His appeal to repent with godly sorrow.  Burning coals of guilt, shame, and remorse – inflamed by the Holy Spirit – can be painful and relentless.  If the Lord ‘grants them repentance’ they will enter into a full knowledge of their guilt and sin’s depravity.  Only Living Waters  extinguish burning coals.

Following his powerful sermon to religious leaders, powers of darkness answered violently upon Stephen, condemning him to death.  This imitator of Christ, so wrapped in the Holy Spirit, pleaded for his killers as the stones crushed his flesh.

Was Stephen pleading, “Lord, pretend you didn’t see this!”  or “Lord, let them get away with murder!”?  Out of mercy he cried out for their reconciliation, for the Lord to grant repentance and, in doing so, absolve their guilt.  The very next verse, “And Saul was there…” bears witness to the answer of Stephen’s powerful prayer, later piercing the heart of at least one offender, heaping many burning coals upon his head.  The shame and conviction from desecrating Christ’s Body underpinned Paul’s salvation and launched him into abandonment to the Lord’s service.

Forgiving our enemies does not erase the consequences of their act, “God cannot be mocked.  A man reaps what he sows.” Forgiving criminal and other acts does not preclude punishment but releases offenders from the personal debt to victims.  Many of the forgiven are ‘free’ behind bars, entering into the presence of God and His purposes.

Of His believers Jesus declares, “You are the light of the world”, in a world increasingly wicked and dark.  We have a personal Savior so intimate that He calls us His Body.  Our enemies are His enemies and, when we relinquish our will and determine to walk blameless before Him, the Lord gains glory in the battle – His Kingdom advances.

“It is a fearful thing to fall into the hands of the living God.”  A “consuming fire” is our God.  He is able to burn in the hearts of our offenders now, push them back or eliminate them.  Can we meditate upon the Lord’s power to recompense, even eternal judgment, and not pity the unrepentant?

“Surely God will crush the heads of his enemies, the hairy crown of those who go on in their sins.”  (Psalm 68:21) 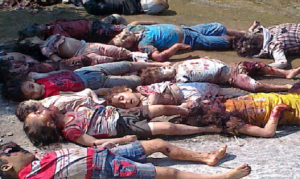 “He takes personally every act of dishonor as well as every act of kindness done to His disciples.” (Safely Home, Randy Alcorn, excerpt)