“And one thing more:  Prepare a guest room for me, because I hope to be restored to you in answer to your prayers.”   Philemon 1:22 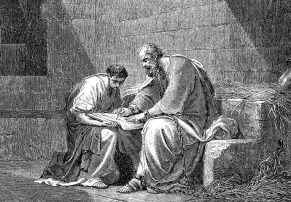 While admittedly an “old man” and prisoner in Rome (~59-61 AD) Paul wrote to Philemon, a wealthy believer in the city of Colossae, a brief letter through which come timeless truths.  Paul commends Philemon’s love and encouragement to other saints, his ministry of refreshment, and notably from this, Paul moves into his central purpose for writing – his accolades and advocacy for Philemon’s fugitive slave Onesimus.

The unwritten truths of this epistle are as significant as Paul’s actual message.  ‘Old man Paul’, writing from chains, never waivers from his faithful service to the Lord – extoling, encourageing, and instructing as from a pulpit.  Assured of God’s sovereignty, Paul knew that neither his freedom nor his chains were determined by Roman decree and power.   Hence he could request, with full expectation, that his Christian brother Philemon prepare a guest room for him.  Anticipating freedom, Paul plans lodging with his wealthy friend, over 900 miles away.

Isn’t faith rooted in anticipation?  What are we anticipating about God in times of darkness, oppression and trial?  Could we, while seeking relief and freedom from some oppression – while in our own chains – reach out to others in service to God?   Are we standing on the anticipation of freedom, the certainty of God’s deliverance?

Christians are the only ones with the right to sing their victory song while still in the battle.  That is the essence of faith in a sovereign and worthy God.  We can sing the victory song before the Red sea parts, before our answer comes.  We are authorized and justified to walk towards those fearful waters before knowing God’s plan.  Pastor David Wilkerson expounded these truths in his message, ‘Right Song, Wrong Side’, 11/15/09, declaring, “Anybody can praise the Lord when the victory comes…anyone can dance when their prayers are answered”.  But how do we live in this anticipated freedom, the deep conviction that God will deliver?

None of us are currently chained by Roman soldiers – but our trials and battles may seem just as binding and oppressive.   The painful entanglement of sin, the hounding of false guilt, fear and anxiety, or spiritual and emotional harassment begin to chain our hearts and mind.  When the devil magnifies loneliness, failure and loss – you are descending into that cell.

And yet, while there, how can we call out and say, “Prepare a room for me, I’m coming out”?

Paul wrote in I Corinthians 10:13: “And God is faithful; He will not let you be tempted beyond what you can bear.   But when you are tempted, He will also provide a way out so that you can stand up under it.”   “A way out” when we are tempted?  Aren’t we looking for “a way out” from darkness, “a way out” of oppressive trial and tribulation?!

But the temptation, even idolatry, is right there, in the place between the chains and freedom.   It is there where we are tempted to lose faith, tempted to complain, endlessly ruminate and ultimately slander God.  We are tempted to idolatry when we see the trial as bigger than God.

The Apostle Paul believed the Word written through him in I Corinthians 10:13.  Without a ‘writ of habeas corpus’ he fully believed in the Lord’s power to free him.  Not chained to discouragement, fear, or unbelief,  Paul was free to trust God and hear from Him while in the place of bondage.  From intimacy with the Lord he could say with authority, “Prepare a guest room for me”…I’m coming home.

The enemy will hone into our secret fears, personal failures and overwhelming trials and magnify them with supernatural craft.  There is great temptation to agree with what we see…there’s no way out!  This is a disaster! I’ll never make it, I can’t even get out of bed!  The Lord Himself is the “way out” and our place, as part of His Body, is to step out and turn toward Him.   Pharaoh would have laughed if the Israelites sang before the Red Sea, sandwiched between the water and the world’s most powerful army.  But that is the faith that most pleases God: Praising Him before He moves, worshipping Him before the victory.

If we have succumbed to despair, even accused and slandered the Lord, now is the time to reconcile and repent.  The Lord can put us in ‘prison’ to expose our hearts and humble us to be of greater use in His Kingdom.  Therein is the challenge of faith, the call to claim the sovereignty of God:  Decide to believe a victorious Psalm, praise Him and worship Him even when your heart seems the heaviest.   Sing Exodus chapter 15 before the sea parts, before your deliverance comes, taking that spiritual step toward Him…reaching out to the hand that holds the key to every chain. 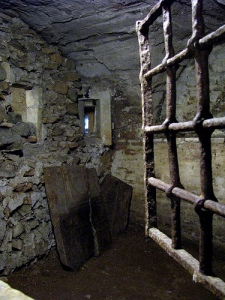 “In my anguish I cried to the Lord, and He answered by setting me free.” Psalm 118:5